"Blazed" (stylized in all lowercase) is the second track from Ariana Grande's fourth studio album, Sweetener. It features American rapper and singer-song writer, Pharrell Williams.[1] The song was released on August 17, 2018, through Republic Records.

This track was first hinted at with lyrics in a picture that Grande posted on Instagram on April 24, 2017.[2][3]

In a scene from the "No Tears Left To Cry" music video, released on April 20, 2018, what appears to be a partial track list for Grande's album, Sweetener, was displayed. Grande confirmed "Blazed" and the collaboration with Pharrell on May 30, 2018.[1] On July 15, 2018, Grande started posting some of the tracklist on Instagram confirming that "Blazed" was the second track on the album.[4] 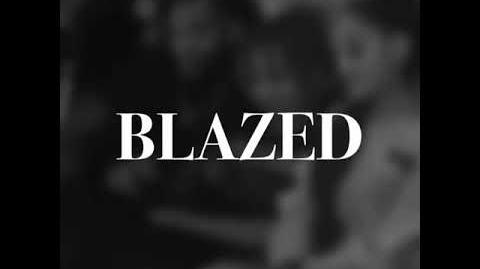 Ariana Grande:
Your magnetic demeanour
Once I have you
I will never let you, never let you go
Thought that I was dreamin'

Now just come on over
Show you how we get down

Pharell Williams:
Shawty, you can get (blazed, blazed)
I'll get you, love you all the same

Retrieved from "https://arianagrande.fandom.com/wiki/Blazed?oldid=70975"
Community content is available under CC-BY-SA unless otherwise noted.