"Breathin" (stylized in all lowercase) is the ninth track from Ariana Grande's fourth studio album, Sweetener. It was released through Republic Records on August 17, 2018.

Within the song's main themes, the anxiety relief, self-improvement and resilience prove to be the most prominent.

The track was first teased in a scene in the "No Tears Left To Cry" music video, released on April 20, 2018 which displayed the entire track list for Grande's fourth album, although not in order.

On June 17, 2018 Grande answered to a fan on Twitter that the song is about an anxiety attack she felt.[2]

Grande spoke about this track on The Tonight Show Starring Jimmy Fallon, stating that she was anxious while recording it and experiencing anxiety attacks. She had to leave the booth to get some air and quiet time.[3]

"Breathin" is one of Ariana Grande's most successful non-singles. When Sweetener came out, the song debuted at No. 4 on the Worldwide iTunes songs chart and peaked at No. 1 on the US iTunes singles chart.[4]

The song debuted at No. 22 on the Billboard Hot 100 and at No. 8 on the ARIA and UK Singles charts, being Grande's first non-single track to reach the Top 10 in the UK and her eighth song overall.[5]

Grande debuted "Breathin" live on August 20, 2018 at The Sweetener Sessions. 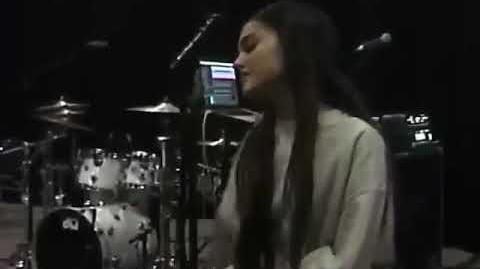 Ariana Grande - Breathin (Live)
Add a photo to this gallery

Well you know everything is gonna be a breeze

Because everything is not what it seems

Retrieved from "https://arianagrande.fandom.com/wiki/Breathin?oldid=73512"
Community content is available under CC-BY-SA unless otherwise noted.