Dangerous Woman (originally titled Moonlight) is Ariana Grande's third studio album. It was released through Republic Records on May 20, 2016. The album was recorded starting in August 2014 and finished on January 21, 2016.

Following the release of Grande's sophomore studio album My Everything on August 25, 2014 which met with positive reviews, Grande confirmed she began working and writing on the album in a livestream in October 2014. Recording sessions began in August 2014. She said that she wanted to release it in late summer or early fall 2015, following in suit to her previous albums. She also said that she had played some new material for her grandmother earlier that day.[1] Ariana continued to record through the rest of the year and into early 2015.[2][3][4][5][6][7][8] In February 2015, Ariana began the Honeymoon Tour. She would find time in between tour dates to record the album. In April, Ariana heavily worked with her friends and songwriters Tommy Brown and Victoria Monet. On the 8th Ariana tweeted that she had made a "really cool song".[9] Ariana tweeted about the song a few days later and said it was very lovely and special. Tommy posted about the song on Instagram and said he wished he could tell fans the name of the song.[10] Ariana soon began hinting at the title by posting photos of crescent moons online.[11] On May 29, 2015, Ariana stated that the special song she was hinting at would be called "Moonlight" and the album would have the same name.[12][13][14] Ariana spoke about the album in June 2015, stating that the title track was inspired by "this boy" (Ricky Alvarez) she had been dating. She said, "It's about this very cute night we had together. I have a playlist of 12 songs already. I plan on writing a lot more as soon as I get home. It's the most personal music I’ve ever written."[15] Victoria confirmed on Twitter that "Moonlight" would not be about Big Sean. Some fans don't believe that and were asking Ariana on Twitter. Ariana replied on VEVO's Twitter, "HAHAHAH. y'all already know. and i love you lmao. a night under the blood moon! that's all."

"Focus" was confirmed as the lead single in August 2015 under the name "Focus On Me" at the iHeartRadio Music Summit. It was released on October 30, 2015 along with its music video. The song debuted at No. 7 in the United States but slid down the chart in the following weeks. "Focus" received mixed to negative reviews from critics and generally underperformed. After the song died down, Ariana returned to recording the album. Ariana was in the studio again on November 17, 2015.[16] On January 6, 2016, Ariana posted on Snapchat that she was recording in her studio.[17] She also posted a picture of the recording booth that showed the corner of her song board.[18] It confirmed three songs, "Be Alright", "Moonlight" and "Let Me Love You". On January 22, 2016, Ariana confirmed on Snapchat that she was done with album #3.

On January 11, 2016, Ariana removed "moonlight" from her Twitter bio which made fans suspicious. Ariana responded by saying "you'll see" and then revealed she was debating to rename the album over a new song she had recorded.[19] On January 14, Ariana appeared on Jimmy Kimmel and confirmed that she was still deciding to change it. On January 21, 2016, Ariana posted a picture on Instagram that said "dw" hinted to fans at the possible new title.[20] On January 31, 2016, Ariana posted a photo on Instagram of her shirt covered up saying, "I can't tell you what this shirt says yet."[21] On February 3, 2016 Ariana performed new music at the iHeartRadio Summit (although it's closed to the public and only a few pictures were released).[22][23] Ariana was seen playing the guitar and using a vocoder, which are both new for her.[24][25] The shirt Ariana wore (which was the shirt previously mentioned) could only be partially seen although fans concluded it said "Dangerous Woman" which they presumed could be the new title. On February 22, 2016, Ariana confirmed the name of the album to be "Dangerous Woman" on Snapchat.[26] On February 24, 2016, Ariana launched a new website (dangerouswoman.com) to dedicate to album updates. The next day she revealed via the website that she would be performing "Dangerous Woman" and "Be Alright" on Saturday Night Live on March 12, 2016. On February 29, 2016, Ariana held a live stream in which she confirmed that there would be 15 tracks on the US edition of the album, with more on special editions. In addition, she revealed that there would be 3 features (later it was changed to 4).

On March 1, 2016, the title track, "Dangerous Woman", was confirmed to be the next single.[27] Ariana later launched a countdown (ending on March 11) for the album pre-order as well as the release of the single "Dangerous Woman". On March 10, Ariana revealed the album artwork. On March 11, 2016, "Dangerous Woman" was released and the album became available for pre-order, which revealed part of the track list for the Standard, Deluxe/North American and Japanese editions. However only the Japanese edition included "Focus", confirming that it has been cut from all other editions, with the album's title track replacing it as the lead single.

Confirmed during an interview with Ryan Seacrest, "Be Alright" would be available on March 18, 2016, on which it was released as the first promotional single from the album. In another radio interview she announced a new song titled "Leave Me Lonely". This track will feature Macy Gray. With the announcement of this song, she said the total number of collaborations on the album are four. On March 18, 2016, Ariana revealed on 102.7 KIIS-FM that Nicki Minaj and Future will serve as features on her new album. All four collaborators' names have now been released. The same day, Ariana hosted a livestream on Twitter for which she shared the first minute of the song, "Let Me Love You".

On March 11, 2016, Grande made pre-order for the album available. On April 16, 2016, Grande revealed the official tracklist via iTunes.

Grande announced in May 2016 that she would be going on tour to support Dangerous Woman at the end of the year or the start of next year.[36] She announced Tour Dates for the first & second leg of the tour. 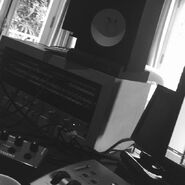 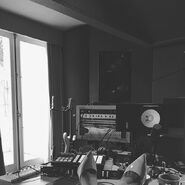 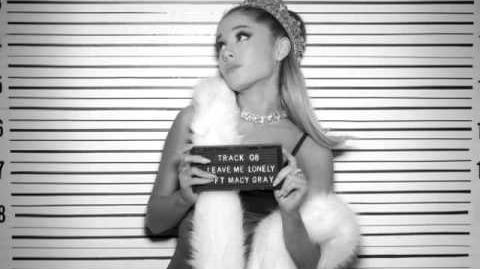 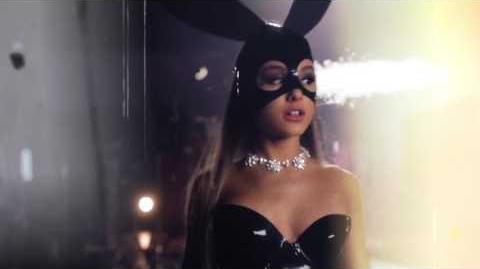