"I Don't Care" is a song on Ariana Grande's third album Dangerous Woman.

On February 21, 2016, Ariana released three separate snippets of the song on her Snapchat. She also posted a few lines saying "Bout to play you a tiny part of a song called I Don't Care it's v special to me 1 of the most recent written & finished" along with a emoji of a coffee cup.[1]

On March 28, 2016, Ariana once again took to Snapchat to post more snippets from her upcoming album, which included a string sample from I Don't Care and a few snippets from Let Me Love You.[2]

On April 10, 2016, the Dangerous Woman tracklist was updated on iTunes to show five explicit songs on the album. [3]

On April 16, 2016, Ariana revealed the tracklist for her upcoming album, and "I Don't Care" was revealed to be one of the explicit tracks.[4]

[Verse 1]
Used to cry 'bout some crazy shit before
I used to feel so obligated to be so much more
I used to let some people tell me how to live and what to be
But if I can't be me, then what's the point? No...

[Verse 2]
Now I laugh about the things that used to be important to me
Used to have a hold on me (used to have a hold, oh)
Like what do you think
And what he thinks and what they think
But I love me (yeah, yeah) 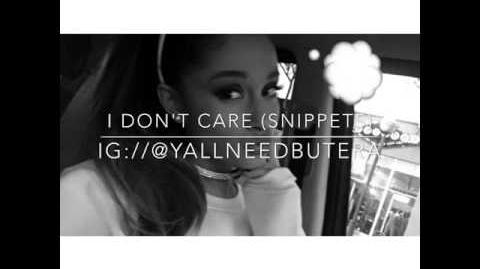 Retrieved from "https://arianagrande.fandom.com/wiki/I_Don%27t_Care?oldid=41346"
Community content is available under CC-BY-SA unless otherwise noted.