The MTV Video Music Awards also called the "VMAs" is an annual award show hosted by MTV. Winners of the different categories are voted on by fans online. Ariana Grande has been nominated several times and has also performed live at the award shows.

The 2013 MTV Video Music Awards were held on August 25, 2013 at the Barclays Center in Brooklyn, New York. Grande didn't received any nominations, but she attended and performed her songs "The Way" and "Baby I" on the red carpet.

Grande performed her singles "Break Free" and "Bang Bang" with Jessie J and Nicki Minaj. She has won an award from four nominations.

The 2015 MTV Video Music Awards were held on August 30, 2015 at the Microsoft Theater in Los Angeles, California.

Grande was nominated two times in the same category, but lost.

Grande performed her hit "Side To Side" featuring Nicki Minaj and she received five nominations.

Ariana performed "God Is A Woman," attended the red carpet with her ex-fiancée Pete Davidson, and introduced another act. She was nominated for several awards and won Best Pop song of the year for "No Tears Left To Cry." 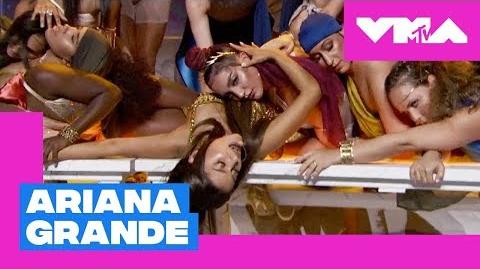 The 2019 MTV Video Music Awards will be held on August 26, 2019 at the Prudential Center in Newark, New Jersey.

Ariana Grande and Taylor Swift had the most nominations with ten.[1]

Retrieved from "https://arianagrande.fandom.com/wiki/MTV_Video_Music_Awards?oldid=88449"
Community content is available under CC-BY-SA unless otherwise noted.