On August 14, 2016, Ariana shared a few snippets of a new song through Snapchat. The title of the song was unknown until Ariana confirmed she had a song called "My Way" a few weeks later.[1]

Some fans speculate that this song is a collaboration with Diplo as Ariana was in the studio with him earlier in August.[2] 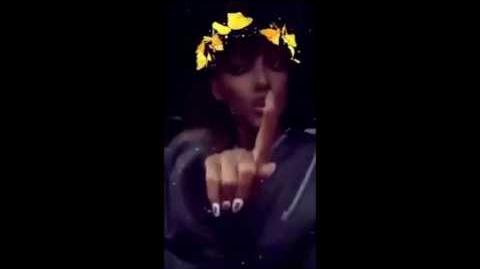 Rewind
Boy you better keep one, or think twice
Notice that I'm the best one, to keep by
I guess I shoulda stayed so far away
It took every ounce of effort just to parlay
Boy it's always in my favor, it go my way
My way

Retrieved from "https://arianagrande.fandom.com/wiki/My_Way?oldid=46672"
Community content is available under CC-BY-SA unless otherwise noted.