Myron is Ariana Grande's tenth dog. He was originally Mac Miller's dog and was adopted on January 16, 2017.[1]

The first time we see Myron would be on January 16, 2017 on Mac's Instagram page.[2] A few days later, Ariana then posted a short boomerang on her Instagram Story of Myron on Mac's birthday. Through various times through 2017, Myron could be seen on both Mac's and Ariana's Instagram pages. On April 24, 2018, Ariana said that Myron had been living with her for a few months and he was "her everything"[3].

After Ariana and Mac broke up, Myron continued to live with Ariana and the rest of her dogs, as he was constantly seen on her Instagram story with Toulouse. On August 26, 2018 (National Dog Day), Ariana's mother confirmed on Twitter that Myron was Ariana's dog. On September 7, 2018, Mac Miller died of an accidental drug overdose. Days later, on September 19, Ariana posted pictures of Myron and her other dogs, on her Instagram story, meaning up until that Grande is now taking care of him full time. 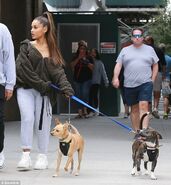 Retrieved from "https://arianagrande.fandom.com/wiki/Myron?oldid=100720"
Community content is available under CC-BY-SA unless otherwise noted.