One Love Manchester was a benefit concert special and British television special by Ariana Grande which was held on June 4, 2017. The concert was live transmitted by BBC and on Grande's personal YouTube channel.[3]

On May 22, 2017, a suicide bombing was carried out at Manchester Arena in Manchester, England, following a concert by Grande as part of her Dangerous Woman Tour. The attacker was identified as Salman Ramadan Abedi, a 22-year-old British Muslim who detonated a shrapnel-laden improvised explosive device at the exit of the arena after the event. 22 adults and children, including Abedi, were killed and 116 were injured, some critically.

Grande posted on her official Twitter account: "broken. from the bottom of my heart, i am so so sorry. i don't have words. [sic]" Grande subsequently suspended her tour and flew to her mother's home in Boca Raton, Florida. She later announced that she would host a benefit concert in Manchester for the victims of the attack.

"One Last Time", from Grande's 2014 album, is the dedicated song to the victims and everyone who was affected at the 2017 Manchester Arena bombing.

Event tickets were made available on June 1, 2017 and sold out within 6 minutes. Fans who were at the concert on May 22 can attend at no cost.

A minute's silence was held before Marcus Mumford opened the concert, at the request of Mumford, in memory of those killed both in Manchester and in London.

Manchester's own Liam Gallagher made a surprise appearance near the end of the concert. Previously, he had stated he wanted to perform but indicated a conflict with the Rock im Park festival in Germany. He flew in straight from his performance in Germany. Coincidentally, he was also scheduled to perform at the Rock am Ring festival two days prior, but the rest of that festival day was cancelled before his scheduled performance due to terror suspicions.

Usher was due to appear but did not perform. He appeared with other musicians in the pre-recorded video sending best wishes to Manchester.

Grande also re-released her single "One Last Time" and will donate all proceeds to the fund. She also has since released a live audio version of "Somewhere Over The Rainbow" that she performed during the concert on music and streaming platforms as an additional charity single.

After "Don't Dream It's Over" performance 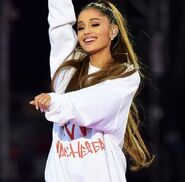 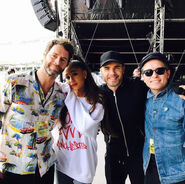 Ariana and Take That

Ariana and Parrs Wood High School choir performing "My Everything"

Retrieved from "https://arianagrande.fandom.com/wiki/One_Love_Manchester?oldid=78849"
Community content is available under CC-BY-SA unless otherwise noted.