He is also a good friend of Ariana Grande and helped produce her fourth studio album Sweetener. In 2019 he won a Grammy Award for Producer of the Year for his work on Sweetener. 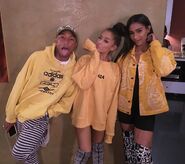