"Problem" is the lead single and second track from Ariana Grande's sophomore studio album, My Everything. It was released through Republic Records on April 28, 2014.

The song features recording artist Iggy Azalea.[1] Big Sean whispers part of the chorus but is not a credited featured artist.[2]

The song is about knowing you would be better off without someone but you can't resist them and want them no matter what.[3] "Problem" debuted at #3 and later peaked at #2 on the Billboard Hot 100, with combined sales and track-equivalent streams of 9 million units. (See Chart Performances)

In late 2013, Grande began working on My Everything with producers from her previous album as well as new producers. It was announced on March 3, 2014, that Grande would be featured on the fifth single from Chris Brown's sixth studio album X titled "Don't Be Gone Too Long". The single was originally set for release on March 25, 2014, however, it was postponed due to Brown being sent to jail awaiting trial on assault charges. Grande had announced the songs delay on March 17, 2014, and two days later following the announcement Grande revealed due to the songs delay, she would be releasing the first single from her, at that time, upcoming sophomore studio album instead. After recording multiple songs for the album, Grande stated that she had chosen the first single from her album.[4] On April 15, 2014, it was officially announced that "Problem" would be the title of the lead single from the album.[5]Initially while recording songs for the album, after Grande had recorded "Problem", she "fell out of love" with the song and didn't want it to appear on her second album. However, following an album listening session with her management and record label, when "Problem" came on Grande decided to keep it for the album.

Grande first released promotional images from the single's photo shoot all throughout March 2014. On April 10, 2014, Grande asked her fans to choose between two new possible images to be used for the single's artwork release.[6] After the votes were tallied, she revealed the winning cover artwork through her Instagram account the next day with the hashtag #10daystilproblem and revealed that Iggy Azalea would be assisting her on the track.[7] Grande began an online countdown to the song's release with promotional posters made by Jones Crow. All of the hashtags for the countdown to the song (#11DaysUntilProblem, #10DaysUntilProblem, etc.) trended on Twitter.[8][9] Grande released two teasers for the song; one features her singing the pre-chorus and the other features Iggy rapping her verse. The single was made available for pre-order on April 21, 2014. Following her debut performance of "Problem" at the Radio Disney Music Awards, the song was released at midnight on iTunes on April 28, 2014. Three hours after its release "Problem" shot to number one on the iTunes singles charts in over 30 countries. 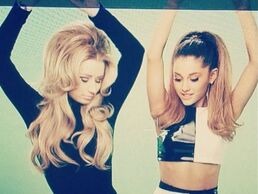 The official music video for "Problem" was filmed on the day after its release on April 29, 2014, with Nev Todorovic as the director, who has previously worked with Grande on her videos for "Right There" and "Almost Is Never Enough". On May 8, 2014, Grande previewed photos from the songs video shoot, which features Grande riding a motorcycle while Azalea rocks big blonde hair. The theme carries on the black, white and retro theme from that of the lyric video, and includes a cameo appearance by Big Sean. The official music video was released on May 30, 2014. The video shows Grande dancing with her backup dancers, interlacing with her hanging out with Azalea and Big Sean.

Grande filmed the lyric video for the song on April 10, 2014.[10] Grande edited the video with Jones Crow, the video's director, and finished it on April 13, 2014.[11] The video was released onto Grande's Vevo channel on May 1. The video features Grande and Azalea performing in noir black-and-white clip behind pinwheel go-go filters. As of December 2018, the lyric video has over 94 million views on YouTube.

Upon release, "Problem" received critical acclaim. Mike Wass of Idolator described the song as "an odd blend of '90s pop and current urban trends (the trap-lite breakdown and a sax hook a la Jason Derulo's "Talk Dirty") but there's no denying that it's catchy." Entertainment Weekly called the song a "dramatic reinvention," and also notes, "The idea that Grande was collaborating with bad girl du jour Iggy Azalea prompted all kinds of speculation, and the result is more or less what everybody expected: Grande's enviable pipes are still the centerpiece, but she also invites a sax-drunk loop, sexy whisper tracks, and Azalea's Jay Z-referencing high-speed verse to the party as well." Music Times commented that "the saxophone-filled track continues the pattern set by Grande's 2013 debut album Yours Truly by being heavily influenced by the '90s R&B scene. This time, 'Problem' pulls from the funky, funky streets with a jazz-influenced riff. An overwhelming (but welcome) dose of saxophone leads the song before the more modern drum-filled beat drops." Pitchfork named it "Best New Track" saying the track "bears all the hallmarks of a future smash as if the future wasn't actually right now."

Upon its release, the song reached the number one position on the US iTunes Store song chart in 37 minutes, breaking the previous record, which reached number one within 50 minutes. In the United States, "Problem" debuted at number 3 on the Billboard Hot 100, eventually peaking at #2 and sold 438,000 copies in its first week. This was the fourth largest first-week sales for a female in history and the tenth largest overall. The song has also sold over a million copies and has earned platinum certification. 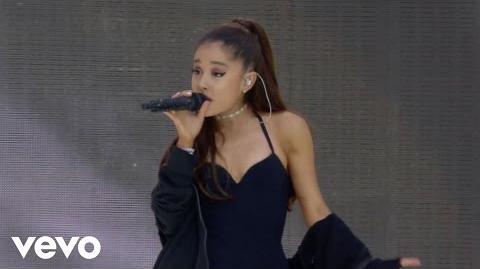 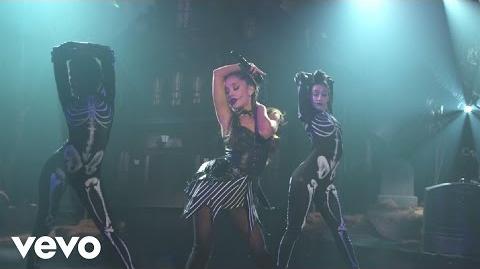 [Intro: Iggy Azalea]
Uh-huh! It's Iggy Iggs!
I got one more problem with you girl, hey!
(One less, one less problem)

[Verse 2: Ariana Grande]
I know you're never gonna wake up
I gotta give up, but it's you
I know I shouldn't ever call back
Or let you come back, but it's you
Every time you touch me
And say you love me
I get a little bit breathless
I shouldn't want it, but it's you

[Verse 3: Iggy Azalea]
It's Iggy Iggs! Uh, what you got?
Smart money bettin' I'll be better off without you
In no time I'll be forgettin' all about you
You sayin' that you know, but I really, really doubt
You understand my life is easy when I ain't around you
Iggy Iggy, too biggie to be here stressin'
I'm thinkin' I love the thought of you more than I love your presence
And the best thing now is probably for you to exit
I let you go, let you back, I finally learned my lesson
No half-steppin', either you want it or you just playin'
I'm listenin' to you knowin' I can't believe what you're sayin'
There's a million you's baby boo, so don't be dumb
I got 99 problems but you won't be one
Like what