"Raindrops (An Angel Cried)" (stylized in all lowercase) is the opening track from Ariana Grande's fourth studio album, Sweetener. It was released through Republic Records on August 17, 2018.

Grande confirmed the song on The Tonight Show starring Jimmy Fallon on May 1, 2018, saying that it's one of the last tracks she recorded for Sweetener and it serves as an intro of sorts to the album.[1] Grande revealed that the song covers Frankie Valli and the Four Seasons' "An Angel Cried". Savan Kotecha tweeted: "The 'raindrops' story is unreal. I'll never forget that afternoon. Goosebumps".[2]

On June 26, 2018, Grande shared the song for her birthday along with its music video directed by Dave Meyers.[3]

"Raindrops (An Angel Cried)" was praised by critics for completely showing Grande's vocals.

The Irish Time's Louis Bruton, said: "Grande presents grief and recovery in a very open and honest way."[4] In TheRed&Black, Abby McGill wrote about the song: "a short 38-second intro showcasing Grande's effortlessly beautiful vocals and her range, leaving fans wishing the intro was longer. Grande uses the first song on some of her albums as an introduction to the theme of the album. However, with this release, each song gives the listener something different."[5]

Grande debuted "Raindrops (An Angel Cried)" live on August 20, 2018 at The Sweetener Sessions. The song is a regular part of the setlist of Grande's Sweetener World Tour, which began on March 18, 2019. 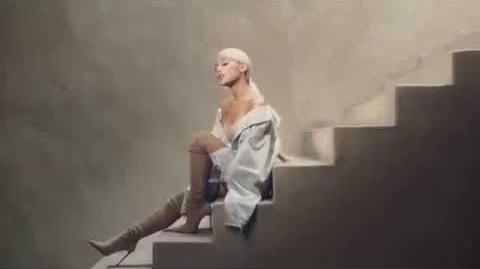 Retrieved from "https://arianagrande.fandom.com/wiki/Raindrops_(An_Angel_Cried)?oldid=93904"
Community content is available under CC-BY-SA unless otherwise noted.