2014-present
Ricardo "Ricky" Alvarez (born July 13, 1992) is an American dancer and photographer. He's also Ariana Grande's ex-boyfriend. Ricky and Grande currently remain friends and have shown support to each other.

Alvarez became a backup dancer for Grande in April 2014. Their first performance together was the Radio Disney Music Awards when Grande debuted "Problem". Through the rest of the year, he (along with the rest of the dancers) performed with Grande at various events. He danced with her for many performances and music videos, including "Problem" and "Santa Tell Me". Grande and all of her dancers became a close-knit group and would quite often spend time together outside of work.[1][2][3] In the choreography for "Be My Baby", Alvarez had a solo section with Grande on stage.[4]

In February 2015, he went on The Honeymoon Tour along with the rest of the crew, and fans began suspecting that he and Grande were dating. They kissed onstage during Grande's performance at the 2015 New York LGBT Pride festival in June, although some people thought the kiss was just part of the choreography.[5] Their relationship was officially confirmed when Grande and Alvarez were seen kissing in a donut store in Los Angeles on July 4, 2015.[6][7] They also spent the rest of the day together and watched fireworks.[8][9] Grande also posted pictures of herself with Alvarez's sister and dog.[10][11]

On July 24, 2016, Grande tweeted "life is wild and change is fucking fantastic", which made fans suspect their relationship came to an end. She then confirmed it by liking tweets that said: "forever boy cancelled". Neither of them confirmed the reason behind the break-up.

In late 2018, Alvarez and Grande started spending time together again, although only as friends. On December 11, 2018, Grande shut down rumors that she and Alvarez were dating again. Alvarez joined Grande on her 2019 Sweetener World Tour as a photographer and videographer alongside Alfredo Flores. 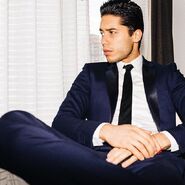 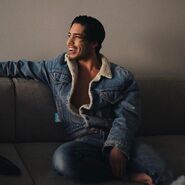 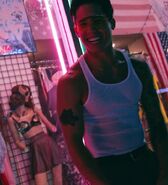 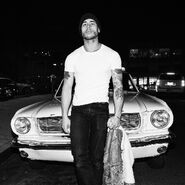 Retrieved from "https://arianagrande.fandom.com/wiki/Ricky_Alvarez?oldid=104135"
Community content is available under CC-BY-SA unless otherwise noted.