Ariana Grande
Sonya Herfmann, also known as Chanel #2, is a recurring character on Scream Queens. She is portrayed by Ariana Grande.

Sonya is one of Chanel Oberlin's sidekicks, who calls her Chanel #2 because she constantly forgets her real name. She is part of the Kappa Kappa Tau

Ariana Grande describes her as a mean and tough girl, and the most open-minded about danger. She is a really loyal friend to the other Chanels, and the most timid, harmless, trustworthy, and least daring of the group. Sonya does not have any goals in life, she is just really happy to be part of The Chanels.[1]

Sonya's wardrobe includes a lot of Nasty Gal and House of CB London clothes.[2] Her style is playful, but at the same time, daring. She likes to wear faux fur jackets and really high platforms.

She usually wears her brown hair in a ponytail and wears dresses with short tops. 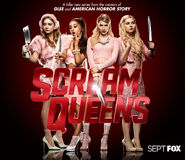