Start a Wiki
This article is about the song. For the album, see Thank U, Next (album).

"Thank U, Next" credits

"Thank U, Next" (stylized in all lowercase) is the lead single and title track from Ariana Grande's fifth studio album of the same name.[3] It is also the eleventh track of the album.[4] It was released through Republic Records on November 3, 2018. A 7-inch vinyl of the single will be released in February 2019, with "Imagine" being the B-side of the single.[5][6]

In the lyrics of the song, Grande mentions and thanks four of her exes: Big Sean, Ricky Alvarez, Pete Davidson and Mac Miller. She also mentions her parents Joan Grande and Edward Butera.

Prior to the release of Grande's fourth studio album Sweetener in August 2018, Grande said she will work for her fifth album with its recording sessions starting in September.

According to Tommy Brown, Grande started working on the song on October 4, 2018. The song was finished right before the shoot of the "Breathin" music video in mid October.[source?] Grande teased lyrics from the song on November 1, 2018 through tweets after a clip of Saturday Night Live was launched showing Grande's ex-fiancé Pete Davidson joking about their broken engagement.[21][22] The song title was revealed that day after she tweeted "Thank U, Next" which was later deleted, however, a screenshot of the tweet can be seen on the single's official artwork.

On November 3, Grande confirmed that the song will be the title track and lead single from the album.[3] It was also reported by TMZ that the song would be released that day, however, neither Grande nor her team confirmed it. Later that day the song was available on many digital platforms with no prior official announcement, being a surprise release.[23]

Pedestrian's Alasdair Duncan called the song a "banger" and that they will be "cranking this tune at maximum volume for the rest of the afternoon."[25] Hugh McIntyre from Forbes wrote: "While many pop stars talk about being honest and vulnerable when it comes to their music, few open up like Grande has on her latest." and described the song as "catchy", while also being "heartbreaking". According to him, the song "may sound deceptively simple upon first play, but when the lyrics sink in and context is applied, it becomes clear that it's ultimately a beautiful piece of music."[26] Rose Dommy, author from Out Magazine said that on the song, "Grande names each of her exes and explains that she's grateful for what they taught her, including Davidson and Mac Miller." She added "Thank U, Next" is "better than the entirety of Sweetener and, possibly, all music ever created."[27] Spencer Kornhaber from The Atlantic wrote: "Her bottom line is that love heals all. [...] she's added a tough edge to that message— highlighting her ownership of not only the gossip, but her romantic life, her growth as a person, and her career as a maker of catchily inspirational bops"[28]

"Thank U, Next" was included on many year-end best-of lists. Time magazine listed the song as the third best song of 2018: "'Thank U, Next' is a highly personal song of self-love and growth that subverts all the obvious pop scripts. It allowed Grande to reframe her narrative as an artist and a woman, and crafted an anthem that celebrates gracious independence over heartbreak."[29] The song was marked at number six on The Guardian's "Top 100 songs of 2018",[30] and number four on the "100 Best Songs of 2018" list by National Public Radio.[31] "The 100 Best Songs of 2018" list by Pitchfork named the song on the #8: "Instead of blaming the men in her life for the pain she’s endured, she thanks them for helping her become the woman she is today. In doing so, she takes the self-love that made Sweetener so special and extends it beyond herself, demonstrating optimism and compassion on the largest possible stage."[32] Dazed magazine's list, "The 20 best tracks of 2018", placed "Thank U, Next" on the #3.[33] and Billboard's "100 Best Songs of 2018" at #4.[34]

Vulture named "Thank U, Next" as the best song of 2018: "Following a year that culturally conditioned people to feed off of spite and vengeance, Ariana Grande decided for the public good to end it with an alternative: maturity" also adding that the song "is the anthem 2018 deserves: Rather than zap the pain from memory, Grande assesses the damage — specifically, her history with love — and rebuilds from the ground up, rekindling her most crucial relationship: Ariana and Ariana. Though she gives her exes their flowers, do not mistake this for a song about men; it’s dedicated to the woman at the eye of their storm who survived."[35] It was also named as the best song of the year by The Fader: "Ari[ana] has a massive audience, but here she sings as though she’s locked eyes with herself in a mirror. Sure, 'thank u, next' is a song about romantic breakups — she namechecks her relationships with Big Sean, Mac Miller, and Pete Davidson — but really it’s a philosophy on par with anything Eckhart Tolle has ever said. Her clarity is universal and contagious, and her logic is somehow warm and gentle: if something doesn’t serve you, maybe its absence will."[36]

Following its release date, on November 5, 2018, the song broke the record for the most streams received by a song in a single day by a female artist on Spotify, with 8.19 million streams globally, and increasingly extended it until November 9, when it received 9.6 million streams.[40][41][42]

Jennifer Coolidge from Legally Blonde, and Jonathan Bennett and Stefanie Drummond from Mean Girls made a cameo in the video,[46][47] as well as Grande's friends including Alexa Luria, Courtney Chipolone, Colleen Ballinger, Elizabeth Gillies, Daniella Monet, Victoria Monét, Tayla Parx, and Troye Sivan.[48][49][50][51][52][45] Grande's dog, Toulouse, also appeared in the music video, Along with a cameo by Gabi DeMartino.[53] Since Joan Grande didn't want to be in the music video,[54][55] Kris Jenner played her mom instead. However, Joan appears as an extra.

It was stated that the video has broken the YouTube record for the biggest music video debut in YouTube history...and also the fastest video to earn 100 million views.

Following its release, it reached 1 million likes on YouTube in less than 35 minutes of its release, breaking Taylor Swift's record of 12 hours with "Look What You Made Me Do" attracted in 2017. The video also broke the record for most-watched video within 24 hours, officially achieving over 55 million views on YouTube in its first day,[56] surpassing the 45.9 million YouTube views of BTS's "Idol" video, the previous record-holder and broke the previous VEVO Record, topping the 43.2 million VEVO views Swift's "Look What You Made Me Do".[20][57]

Billboard named the music video as Grande's best: "Complete with a 'Burn Book,' the 'bend and snap,' several celeb cameos (Troye Sivan, Kris Jenner, etc.) and a stamp of approval from the movies' original actors, the highly anticipated music video nonetheless managed to exceed all expectations."[59] In its "The 50 Best Music Videos of 2018: Critics' Picks" list, the magazine placed the song at number 9: "It takes a star at the top of her game, a singer whose personality and heartfelt subject matter shine through even as she's dressing up as her favorite rom-com characters. The final product taught us love, the elaborate roll-out taught us patience, but nothing about it taught us pain -- now that's so amazing. --".

Three behind-the-scenes videos, directed by Alfredo Flores, were uploaded on Grande's YouTube channel on December 2, 7 and 11, respectively. A director's cut/blooper reel, directed by Hannah Lux Davis, was released on January 4, 2019. 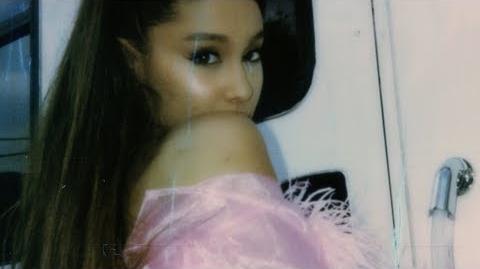 Ariana Grande - thank u, next (behind the scenes - part 1) 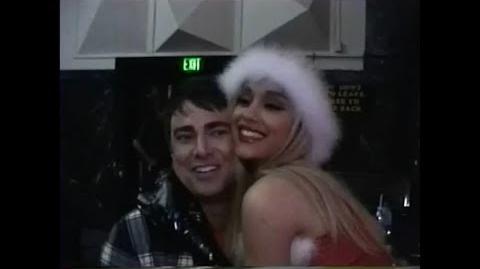 Ariana Grande - thank u, next (behind the scenes - part 2) 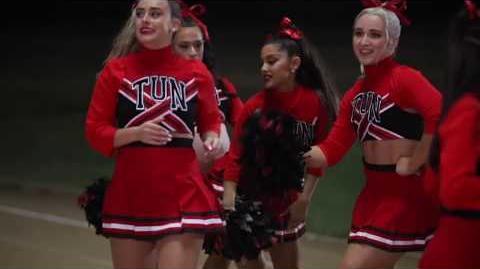 Ariana Grande - thank u, next (behind the scenes - part 3) 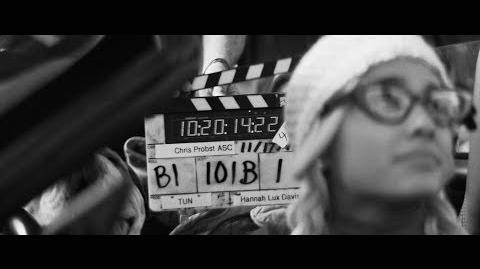 Grande gave the first televised performance of the song live along with her single "Breathin" on The Ellen DeGeneres Show on November 7, 2018.[60][61] The song was also performed at the 2018 Billboard Women in Music where she was honored with the "Woman of the Year" award.[62] 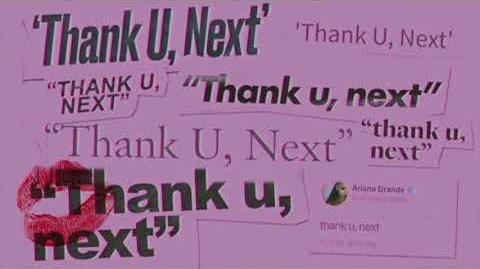 Ariana Grande - thank u, next (audio) 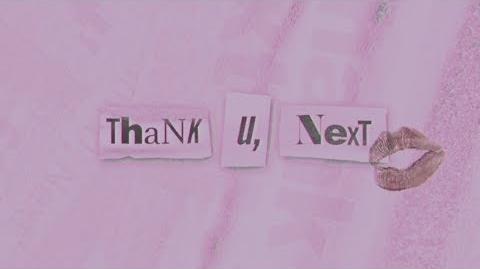 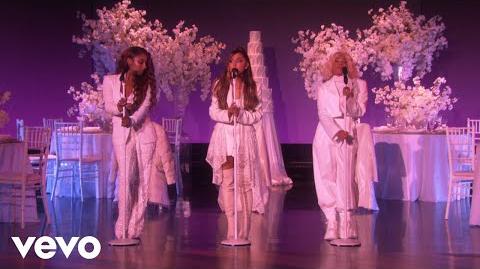 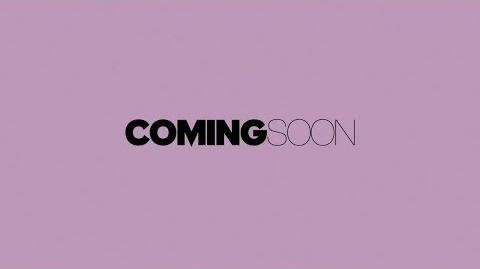 Ariana Grande - thank u, next (trailer) 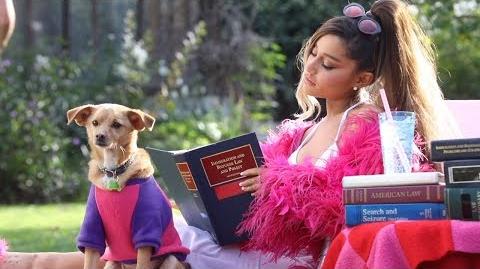 Ariana Grande - thank u, next (behind-the-scenes) 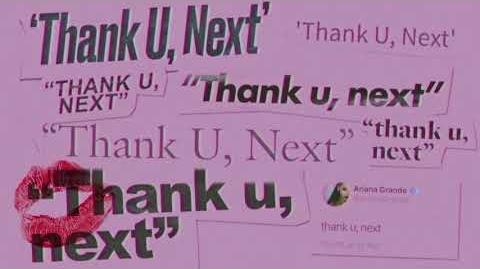 Ariana Grande - thank u, next (clean) 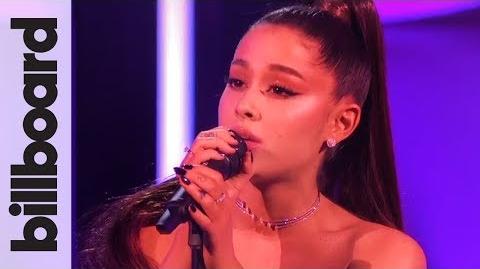 [Verse 1]
Thought I'd end up with Sean
But he wasn't a match
Wrote some songs about Ricky
Now I listen and laugh
Even almost got married
And for Pete, I'm so thankful
Wish I could say, "Thank you" to Malcolm
Cause he was an angel

[Verse 2]
Spend more time with my friends
I ain't worried 'bout nothing
Plus, I met someone else
We having better discussions
I know they say I move on too fast
But this one gon' last
Cause her name is Ari
And I'm so good with that (So good with that)

[Pre-Chorus]
She taught me love (Love)
She taught me patience (Patience)
How she handles pain (Pain)
That shit's amazing (Yeah, she's amazing)
I've loved and I've lost (Yeah, yeah)
But that's not what I see (Yeah, yeah)
Cause look what I found (Yeah, yeah)
Ain't no need for searching
And for that, I say

[Bridge]
One day I'll walk down the aisle
Holding hands with my mama
I'll be thanking my dad
Cause she grew from the drama
Only wanna do it once, real bad
Gon' make that shit last
God forbid something happens
Least this song is a smash (Song is a smash)

Retrieved from "https://arianagrande.fandom.com/wiki/Thank_U,_Next_(song)?oldid=83619"
Community content is available under CC-BY-SA unless otherwise noted.