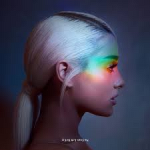 I joined this page in early 2016, when we were all looking forward for the Dangerous Woman era, I quit this Wiki in 2017 and didn't come on much. However, since the new Sweetener era is starting, I am so excited and want to join back! I'm really sorry for my long inactivity, but I want to thank the amazing community!

Tattooed Heart - Ariana's voice is so angelic and elegant in this song, I love it. Edit

One Last Time - Beautiful song and the video is too. The tribute at One Love Manchester was such an amazing mark of respect. <3 Edit

Why Try - I think this song would have been a great single choice. Edit

Problem - I love this song! For some reason, I can memorise Iggy's full rap verse. Edit

Break Your Heart Right Back - My personal favourite song on My Everything. Everything about this song is just OMG. Edit

My Everything - Beautiful. Edit

Just A Little Bit Of Your Heart - I love this one. Edit

Hands On Me - Funny song, the solo version is better. Edit

Love Me Harder - I'm not keen on The Weeknd, but his voice and verse in this song is not bad! Edit

Moonlight - I wish this had a video, this song is one of my favourite Ariana songs ever! Edit

Be Alright - The message of this song is inspiring, I love it. Edit

Side To Side - I love Nicki Minaj, so of course this is going to be one of my favourite Ariana songs. The reggae ting is just great. Edit

Greedy - Ariana's voice on this! This should have been a single instead of Everyday. Edit

Sometimes - An extremely underrated song. I see songs like Touch It and Thinking 'Bout You get talked about a lot, and they deserve it; but Sometimes is just beautiful and deserves a lot more exposure! Edit

Bad Decisions - Again, a very underrated song. Would make a great single choice as the chorus is very catchy. The bridge too omg. Edit

Touch It - MY FAVOURITE SONG ON DANGEROUS WOMAN. THE SLICK PRODUCTION ON THIS SONG JUST MAKES ME GO TO ANOTHER DIMENSION. THE BACKGROUND VOCALS AND THEM FALSETTOS AT THE END SOUNDS LIKE HEAVEN! Edit

Forever Boy - I love Knew Better. But Forever Boy, I definitely prefer. The transition to the song I find to be very sonically pleasing. The thing that I really love about this song is the EDM-style vibe and at the end of the chorus, when she says "Forever Boy" the final time but doesn't change the key. Edit

Thinking 'Bout You - Beautiful song. Should have had a video and maybe been the final single to Dangerous Woman. Edit

No Tears Left To Cry - My favourite lead single, and possibly one of my favourite Ariana songs, can't wait for the album! Edit

Sweetener - The title track is beautiful, it makes me cry as it's so cute! Edit

Focus - Was paid dust! I love the visual to this song so much and the song itself is amazing. I really like the "Focus On Me" in the chorus, I think it adds a lot to the song. Edit

Love Is Everything - My personal favourite on Christmas Kisses. A really underrated song. Edit

Although I don't have many songs from Yours Truly, I still really love the album. I think every one of Ariana's albums is different, and an improvement in some way. I think my favourite to least favourite albums go: Dangerous Woman > My Everything >>> Yours Truly Edit

I am an active member on the Demi Lovato Wiki, if any of you want to join there. Thank you :) Edit

Retrieved from "https://arianagrande.fandom.com/wiki/User:Ariana_Rexha?oldid=67615"
Community content is available under CC-BY-SA unless otherwise noted.