After her wonderful performance, bishop Charles H. Ellis III took the stage and called Ariana for make a "joke" about he thought she was a Taco Bell menu item.

Many people noticed, that the way the bishop embraced Ariana was weird... straight to the point? He touched Ariana's right breast.

That was very disrespectful. He is a bishop, she is a woman, they are at a funeral, was it necessary? If you defend him, do you also embrace your mom / sister / aunt with your hand on her chest? That is very strange. He could touch her back, her arm, even UP from her hip, but no, he chose to touch and fondle Ariana's chest.

What's the sh*t in all this?

There are people who defend the bishop and blame Ariana for how she was dressed. Personally, her dress was not out of place or was anything provocative. Knowing Ariana (I think), she would not go provocative at a funeral, it would not be her intention. 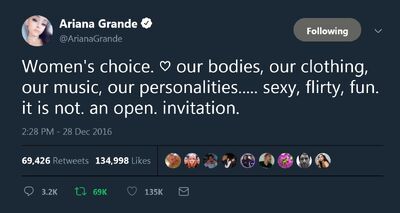 Why didn't Ariana say anything at that time?

They were at a funeral, in front of many people. If Ariana would do something at the time, many would call it "exaggerated" and other ridiculous things. So far, she did not talk about it, and I hope she does.

What do you think of what happened? Leave a comment below

Lucas joined the Ariana Grande Wiki on January 5, 2016, being one of his first communities. He didn't know how to edit at all, so the admins at that time used to revert his editions over and over again. He took the edition seriously around March of the same year. Later, he learned how to edit and CSS.

Lucas is currently member of the staff of the Ariana Grande Wiki.
View profile • Contact
Retrieved from "https://arianagrande.fandom.com/wiki/User_blog:Lucas_Millonario/Bishop_inappropriately_touched_Ariana?oldid=73215"
Community content is available under CC-BY-SA unless otherwise noted.